Why are Females Being Missed on the Autism Spectrum (AS/ASD)? Part 2

Why are Females Being Missed on the Autism Spectrum (AS/ASD)? Part 2 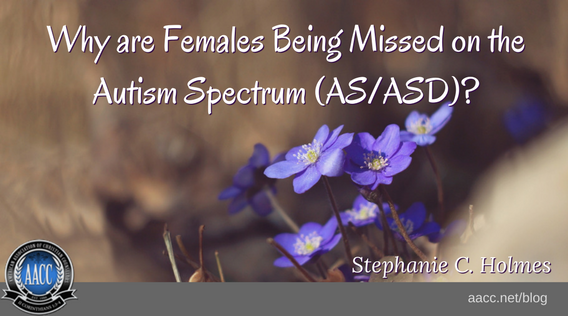 An Interview with author and advocate, Tracey Cohen

Continuing my interview with Tracey Cohen who was diagnosed with Asperger’s at age 39, I asked Tracey about when parents should tell their child they are on the spectrum and how people react when they find out about her diagnosis. She is passionate about professionals and educators understanding the manifestations or nuances in symptoms for females on the spectrum. In an older blog/article, I outline my own opinion about telling your child about their diagnosis (https://www.aacc.net/2013/04/03/autism-awareness-should-i-tell-my-child-they-are-on-the-spectrum/) but I wanted to ask Tracey her thoughts on parents who do not tell their child they are on the spectrum for fear of labeling them.

Stephanie Holmes (SH): Tracey, many times I hear from parents who do know their child is on the spectrum, do not tell them because of the fear of labeling them or belief the child will use it as an excuse for behavior or not to perform at their best potential. What are your thoughts on that?

Tracey Cohen (TC): I feel if a parent knows their child has the diagnosis and they do not tell them, they are doing the child a great disservice. That is being more than overprotective- after all, it is knowledge that provides empowerment. Knowing your child has the diagnosis and not sharing, in my opinion, is very harmful to them and not only harmful it is indirectly communicating shame- like having autism is something to be ashamed about.

SH: How early should a child know?

TC: I think the earlier, the better. Using age appropriate communication tell your child in an informational (non-emotional way- added by Stephanie). The sooner you communicate about something that is affecting them- the knowledge is power. The person with autism needs to know about themselves- this part of learning about self.

SH: My daughter often hears this, and I would like to know how you feel when someone says. “But you don’t look autistic” or “You hide your autism so well.” “You are so high functioning.” Does this offend you?

TC: I would not say offensive, but I would say hurtful and demeaning. This is why I think we need to be careful in using the terms high and low functioning or get rid of them altogether. Using the term high functioning misrepresents the effort it takes and difficulty level for the person on the spectrum to appear competent and make others feel comfortable and vice versa. Just because a person does not display what neurotypicals would consider as “normal functioning”, this is not a true indicator of a person’s competence or intelligence. Those of us on the spectrum represent a minority but we are generally judged/evaluated by neurotypical standards.

Being told we have “good eye contact” now or we are so high functioning is hurtful. If an adult has gone their life without a diagnosis, they have probably had to learn eye contact and coping skills along the way the hard way. This learning often makes it difficult to get the diagnosis as well. It is also demeaning after I speak for someone to tell me “Oh I do that” or “I get stressed out socially too” but it is different. I want to say to them, ‘If you are stressed out socially but 15 minutes later can go hang out with a friend for coffee, you do not know how a person on the spectrum feels when they are done interacting for the day.’ I feel like I am falling apart and just going home for a few minutes does not recharge me to back out to hang-out. I am wiped out for the day. Many women on the spectrum have spent the day trying very hard to interact but then at home in private are wiped out and may feel like they cannot do anything else that day with people.

SH: When my daughter says, “My people button is broken.” I know that is her cue that she is done.

TC: I like that- I feel that way too- I am just done, and it is not because I do not like people. It is about being done or unable to continue interacting with people.

SH: Why would you encourage other adults who think they have AS/ASD traits to get diagnosed?

TC: Validation, increased knowledge, and understanding for themselves as well as their family and friends and people they may become involved in relationships with.

Tracey and I discussed that AS women tend to be misdiagnosed and the common misdiagnoses are Bi-Polar (because of mood swings), Generalized Anxiety or Social Anxiety Disorder, and untreated eating disorders. Tracey shared a story of being misdiagnosed with Anorexia. Sharing the context, she had a severe illness as a child where she lost a lot of weight. At a checkup, after her illness, she had gained 10 pounds but was not overweight. The doctor remarked to the mother about making sure to keep track of her weight so Tracey would not get fat. As a person on the spectrum, yet undiagnosed, she heard what the doctor said and took it literally- gaining any weight will make you fat, so it is not good to gain weight. She became intentional about food restriction based on what the doctor said not for the reasons most people with Anorexia become anorexic. As she continued in puberty to not gain weight and was hospitalized with an eating disorder, she said, “What they were telling me about why I was not gaining weight was not true.   How they were trying to tell me to change was not working. I had to hear that it was okay to gain weight and work that out on my own, but I was reacting to what I heard the doctor say as someone who is in authority.” Tracey had been acting on what she perceived the doctor say when she was a child and thought she was not supposed to gain weight. In another blog I wrote about girls with restrictive food interests or sensory issues to food may be misdiagnosed as Anorexic but really be special or restrictive interest of AS/ASD. Tracey’s book is very informative about the differences in male and females and educators, clinicians, and family members of AS women/girls would benefit from it.

Stephanie C. Holmes, MA is an ordained minister and certified Christian counselor with the Board of Examiners for Ga Christian Counselors and Therapists. Stephanie’s career path changed when her eldest daughter was diagnosed with Asperger’s in 2004. Stephanie practices at her home church, The Church of Chapel Hill Dunwoody Campus and has an international consulting practice Autism Spectrum Resources for Marriage & Family, LLC. She will be speaking at our 2017 World Conference on Autism- it’s a Family thing!

Tracey Cohen, a lifelong competitive runner, freelance writer, returned Peace Corps Volunteer, was diagnosed with Asperger Syndrome at the age of 39. Sharing her own struggles and discoveries her book Six-Word Lessons on Female Asperger Syndrome, she aims to empower others to learn, accept and fine peace in our complex, neurotypical dominated world.